I decided to officially archive this blog on the day my DPhil was confirmed. But I have waited for the electronic publication of my thesis, Interrogating Archaeological Ethics in Conflict Zones: Cultural Heritage Work in Cyprus, to announce the archiving. From now on, I will blog at Conflict Antiquities.

Read more »
Posted by samarkeolog at 11:05 am No comments:

[Thanks to Dave S's comment on the Evretou photo blog, I will try to give each site photo blog a proper introduction; until then, I'll cross-post the introductory posts from Cultural Heritage in Conflict.]

This former Turkish Cypriot village is officially known as Kios, commonly known as Istinjo, and occasionally known as Tabanlı (1); however it is named, the abandoned village has been reoccupied, and it has decayed; and it has been damaged and destroyed. I've finally created the site photo blog for the evacuated village of Kios/Tabanlı: cultural heritage and community.

The T [Turkish Cypriots] left for resettlement in N [northern] Cyprus under UNFICYP escort in Aug[ust] 1975, [and] G [Greek Cypriot] refugees have occup[ied] some houses under the Govt [Government] "temp[orary] allocation" program[me].

Yet as one Turkish Cypriot, Halil (2008) observed, 'the only inhabitants are now goats, sheep and pigs, tended by local farmers'. (Turkish Cypriot journalist Hasan Karaokçu (2003c) had found the same thing; and so did I, in this skeleton of a home.)

And recently, the Turkish Republic of Northern Cyprus Presidency(2) claimed 'Tabanlı (İstinco)' had been 'destroyed [yok edilen]' (KKTCC, 2007). So was the village reoccupied, or was it destroyed?

It is difficult to explain the raid that was carried out in my village....

Hundreds of walnut trees which were grown by our grandfathers or by our generation were all cut and taken away. Now you can't even find their traces. Of course, the Greek Cypriots benefited from the timbers of the walnut trees, which are quite expensive. They used these timbers both for carving and making furniture. This was a short way for the Greek Cypriots to make a profit....

The Greek Cypriots did all this intentionally, so that the Turks would not want to return to their former places (cited in Karaokçu, 2003a).

The wallnut [sic - walnut] tree was long gone. The orchards, the vineyards, the almond and carob trees, even the figs had disappeared. There were a few skinny pomegranate and orange trees trying to survive in the suffocating heat. The water at the fountain which was flowing day and night as thick as my neck had almost totally dried up.

And not only orchards and vineyards had been destroyed.

BirKıbrıslı (2007a), relayed that one of the other villagers 'was unable to locate the plot of land on which his house stood because no landmark he recognised remained standing'.

It was like visiting a foreign place. None of my family's houses were still standing. And the house I was born in lay in ruins just across the road from Grandparents' "guest house"....

I couldnt identify the places where the village flour mill and the wheat threshing field had stood.

The buildings had not simply decayed.

Like Hasan Karaokçu (2003c), I found the school with its doors removed, its windows smashed, and the ruin reused as a straw barn.

Furthermore, Karaokçu (2003c) claimed that '[a]ll the houses [in Appiyaca district of lower Istinjo/Tabanlı] had been razed to the ground and the place was in ruins'. At least some of the ruins I saw seem to fit Karaokçu's description of homes razed to the ground; and others appeared destroyed.

But the Cyprus Temples project had evidently visited Istinjo Mosque soon after its restoration, because in 2003, Turkish Cypriot journalist Hasan Karaokçu (2003c) found the mosque 'a victim of neglect. Its doors and windows were all broken and inside was full of pigeon nests and faeces'.

Moreover, BirKıbrıslı (2007b) noted that '[o]nly the school building and the mosque, minus the minaret, looked familiar'.

So, the mosque's doors and windows had been broken, and its minaret destroyed; the school's doors had been removed and its windows smashed, then its ruin reused. Some of the village's houses had been ruined or razed to the ground.

This evidence seems to suggest that the Turkish Republic of Northern Cyprus Presidency was right: a few of its houses may have been reoccupied immediately after the displacement of its Turkish Cypriot community, but the village of Kios/Istinjo/Tabanlı was 'destroyed [yok edilen]' (KKTCC, 2007).Bibliography

[This was originally posted on Cultural Heritage in Conflict on the 23rd of September 2009.]
Posted by samarkeolog at 3:00 pm 1 comment: 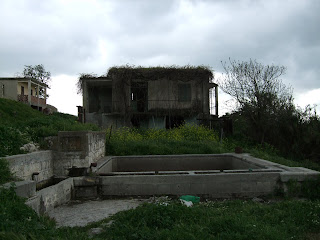 Kios buildings 12: the stone structure in the foreground was built by the British colonial Water Supply and Irrigation Department (WSID) in 1944; whether it was a water storage tank or some other installation, the water is still running. 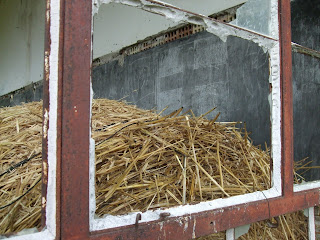 Kios building 11e1: there is also flag graffiti in the school; it's a little difficult to tell in black-and-white, but it seems like the cross on the Greek flag symbolising Greek Orthodox Christianity. 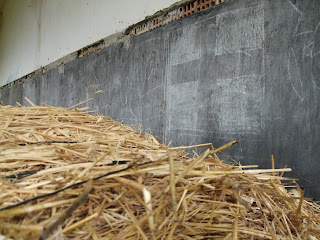 Kios building 11e2: here's a close-up view of the flag.
Posted by samarkeolog at 9:30 am No comments: 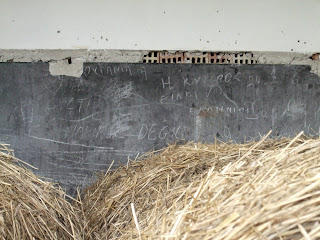 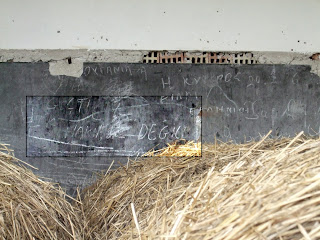 Kios building 11d2: one Turkish-language graffito reads 'hakımız değil', which I think translates as something like "it is not our right/justice", perhaps more colloquially as "we did not deserve this". 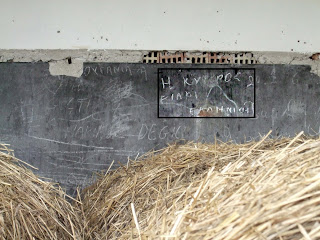 I don't know if these graffiti are in a conversation, or whether they are completely different statements.
Posted by samarkeolog at 9:15 am No comments: 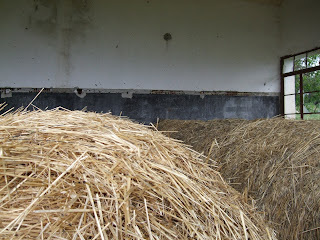 Kios building 11c1: the school blackboard/chalkboard has been graffitied, with both Greek-language and Turkish-language graffiti. 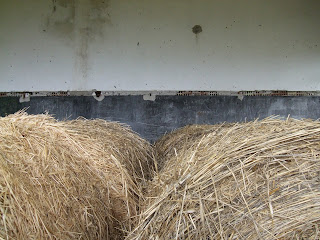 Kios building 11c2: the graffiti include non-nationalist writings, like a love heart, and a tag of 'Ourania [Οὐρανία]' (one of the Muses, the ancient Greek goddess of astronomy; I don't know whether it's the name of the graffiti artist, or something completely different).
Posted by samarkeolog at 9:00 am No comments: 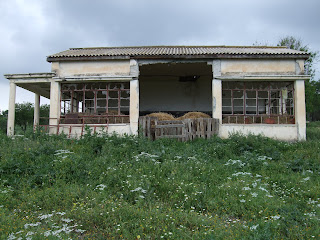 Kios building 11b: after the school was ruined, it was reused as a straw barn; its removed doors were replaced with wooden crate pallets.
Posted by samarkeolog at 8:45 am No comments: 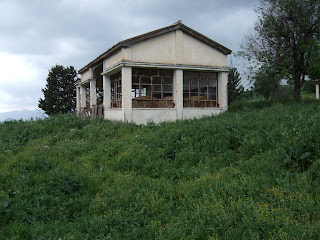 Kios building 11a: the village school is ruined; the doors have been removed; and every single pane of glass has been smashed. The ruin is now being reused as a barn.
Posted by samarkeolog at 8:30 am No comments: 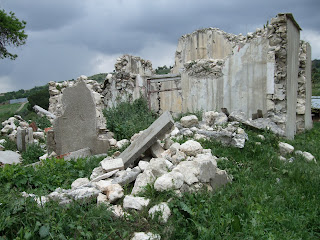 Kios buildings 10a: ruined walls and piles of broken stone, brick and concrete are all that remain of this home. 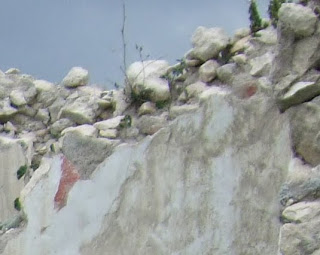 Kios building 10b: there seems to be some red paint on the wall; but I can't identify or explain it.
Posted by samarkeolog at 8:15 am No comments: 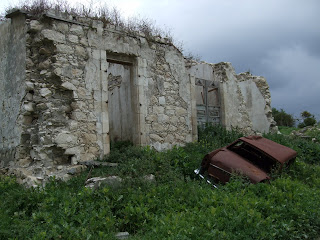 Kios building 9: if its carved wooden doors are any indication, this building would have been pretty; but now the home is ruined and being overgrown by grasses and shrubs.

The roots of the plants on top of the house may be further ruining the house, by growing between the stones and splitting them up; but at the moment the roots may be holding the stones together.
Posted by samarkeolog at 8:00 am No comments: 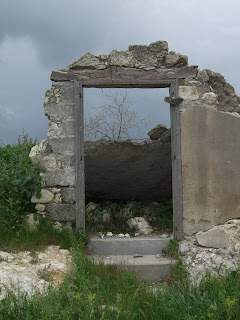 Kios building 8: this is the only remaining doorway to the home; behind the doorway is the collapsed concrete roof.
Posted by samarkeolog at 7:45 am No comments: 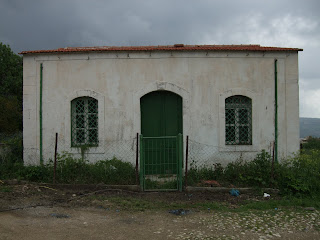 Kios building 7a: this is the village mosque; it's empty inside.

The Cyprus Temples project's bicommunal architectural survey team generally said it was in good condition, and didn't mention any damage. Yet when he visited, Turkish Cypriot journalist Hasan Karaokçu found that

The Mosque was also a victim of neglect. Its doors and windows were all broken and inside was full of pigeon nests and faeces. We could hardly walk around the Mosque because it was surrounded by overgrown weeds and thorns.

So the mosque must have been repaired; but a Turkish Cypriot from Istinjo, BirKıbrıslı, mentioned seeing the 'mosque, minus the minaret'.

I don't think the bicommunal architectural survey team - or Karaokçu - knew the mosque had had a minaret before; they did not mention any minaret, and the Cyprus Temples project said the structure of the mosque was in '[g]ood' condition and the mass of the building '[p]reserved'.

It was like visiting a foreign place. None of my family's houses were still standing. And the house I was born in lay in ruins just across the road from Grandparents' "guest house".

The wallnut [sic - walnut] tree was long gone. The orchards, the vineyards, the almond and carob trees, even the figs had disappeared. There were a few skinny pomegranate and orange trees trying to survive in the suffocating heat. The water at the fountain which was flowing day and night as thick as my neck had almost totally dried up.

I couldnt identify the places where the village flour mill and the wheat threshing field had stood. Only the school building and the mosque, minus the minaret, looked familiar. 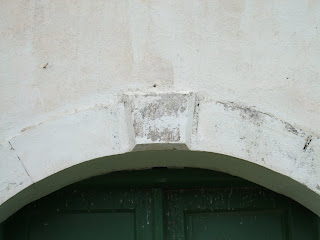 Kios building 7b: mosque keystone - the Cyprus Temples project couldn't see it properly, and thought it said 1935; but zoom shows the mosque was built in 1937.
Posted by samarkeolog at 7:30 am No comments: 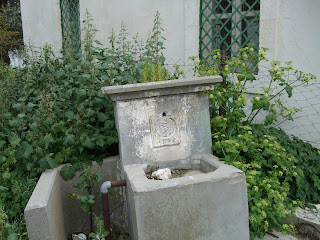 Kios building 6: broken fountain; built in 1962. The building in the background is the mosque.
Posted by samarkeolog at 7:15 am No comments: 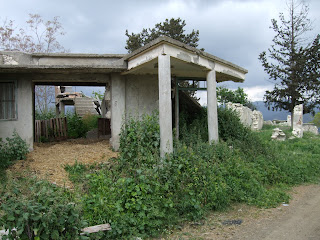 Kios buildings 5: all that remains is the skeleton of a concrete home.

The straw on the floor and the wooden pallets "inside" suggest the house is being reused as an animal pen. There are also the ruins of a stone-built house in the background.
Posted by samarkeolog at 7:00 am No comments: 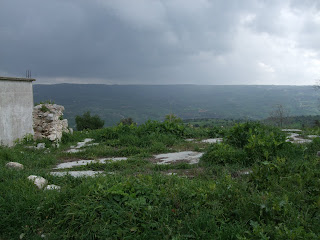 Kios building 4: the ruins of this home are being overgrown; in time, the ruins will disappear, and it will look like there was never a building here.

This resembles the foundations of a home, which had been razed to the ground, in a Kurdish village in Turkey, Puneyn building 7.
Posted by samarkeolog at 6:45 am No comments: 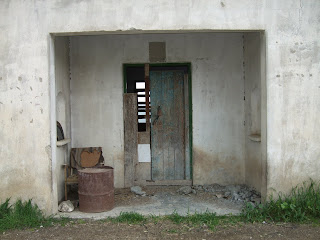 Kios building 3a: this home seems to have been reused as a store. 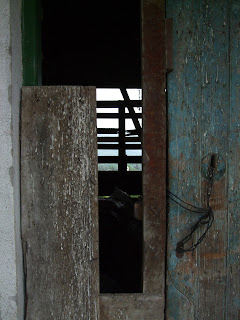 Kios building 3b: the door of the home has been repaired; but it would never keep a determined human out, so it must have been repaired to keep animals out. 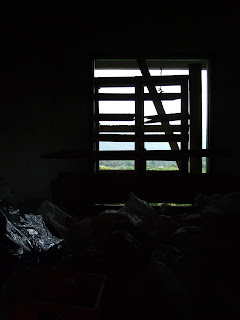 Kios building 3c: the poor light makes them difficult to see, but it looks like there are plastic bags inside; I think the house is being reused as a store.
Posted by samarkeolog at 6:30 am No comments: 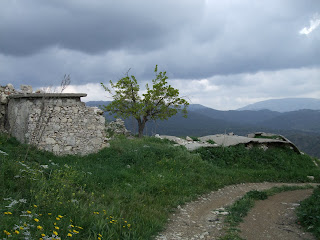 Kios buildings 2: I took the photographs in 2008, but I hadn't looked at them for a long time. When I uploaded them, I didn't really think about it, but looking at them again, I reckon "buildings 1" and "buildings 2" are the same buildings.

On the left, there are the ruins of a stone building with a concrete roof, conserved with cement and brick; the corner by the tree looks like the corner of the ruin in Kios buildings 1.

On the right, there is a collapsed building's broken concrete roof, slowly being overgrown by plants; again, it looks like the collapsed roof in Kios buildings 1.
Posted by samarkeolog at 6:15 am No comments: 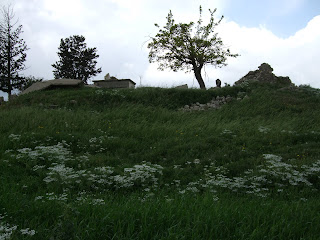 Kios buildings 1: on both sides of the photograph, ruins.

On the left, there is the broken concrete roof of a collapsed building; on the right, there is the corner of a stone building, its stones spilling down the hillside.

These resemble the ruins in a Kurdish village in Turkey, Kiledar buildings 12.
Posted by samarkeolog at 6:00 am 1 comment:

samarkeolog
Academic background and more about me.

This work by Sam Hardy / samarkeolog is licensed under a Creative Commons Attribution-Non-Commercial-Share Alike 2.0 UK: England & Wales License.
Permissions beyond the scope of this license may be available in my academic disclaimer.